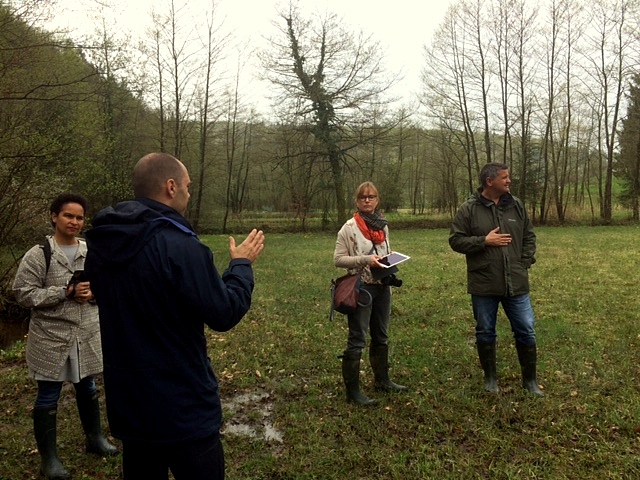 Donor representatives visit two Grants-funded projects, i.e. ‘Ljuba’ and ‘Incredible Years – For Every Child’ on the sidelines of the signing ceremony for the memorandums of understanding on the Implementation of the Norwegian and EEA Financial Mechanisms 2014–2021.

The representatives of the Ministry of Foreign Affairs of the Kingdom of Norway, the Embassy of the Kingdom of Norway and the National Focal Point (NFP) visited the Ljubljana Marshes Landscape Park. The project ‘People for Marshes – Biodiversity Conservation at the Ljubljana Marshes’ or short ‘Ljuba’ was implemented under the EEA Financial Mechanism Programme. Representatives of the project promoter, Institute of the Republic of Slovenia for Nature Conservation, briefed donor delegation on project achievements and outputs which include halting the loss of biodiversity in the Ljubljana Marshes and improving the conservation status of three qualifying habitat types and four Natura 2000 qualifying species (an orchid and three butterfly species). The project promoter highlighted the immense contribution of donor funding which helped raise awareness about the responsible role of agriculture in conservation of biodiversity, and encouraged farmers to adopt biodiversity-responsible practices and nature-friendly grassland management. The activities of the project ‘Ljuba’ are continued and now receive support from other funding sources. Donor and NFP representatives made field visits to local farms to learn more about the project activities and achievements on the ground.

Donor and NFP representatives later visited the Clinical Department for Developmental, Child and Adolescent Neurology at the Paediatric Clinic in Ljubljana to learn about the Norway Grants-Funded project ‘Incredible Years – For Every Child’. The project was implemented as a programme for prevention and early intervention of behavioural disorders in children through a series of parent training sessions. During the project implementation, 20 professionals were trained to deliver programmes for prevention of behavioural disorders, and over 300 parents participated in this pilot programme. The project promoter representatives underlined that cooperation with the Norwegian partner was excellent and mutually beneficial and expressed pleasure that the project is being continued; the latter has been financially supported by the Slovenian Ministry of Health since 2017.