Domov > News > Slovenia to receive 37.7 million euros through the EEA and Norway Grants

Slovenia to receive 37.7 million euros through the EEA and Norway Grants 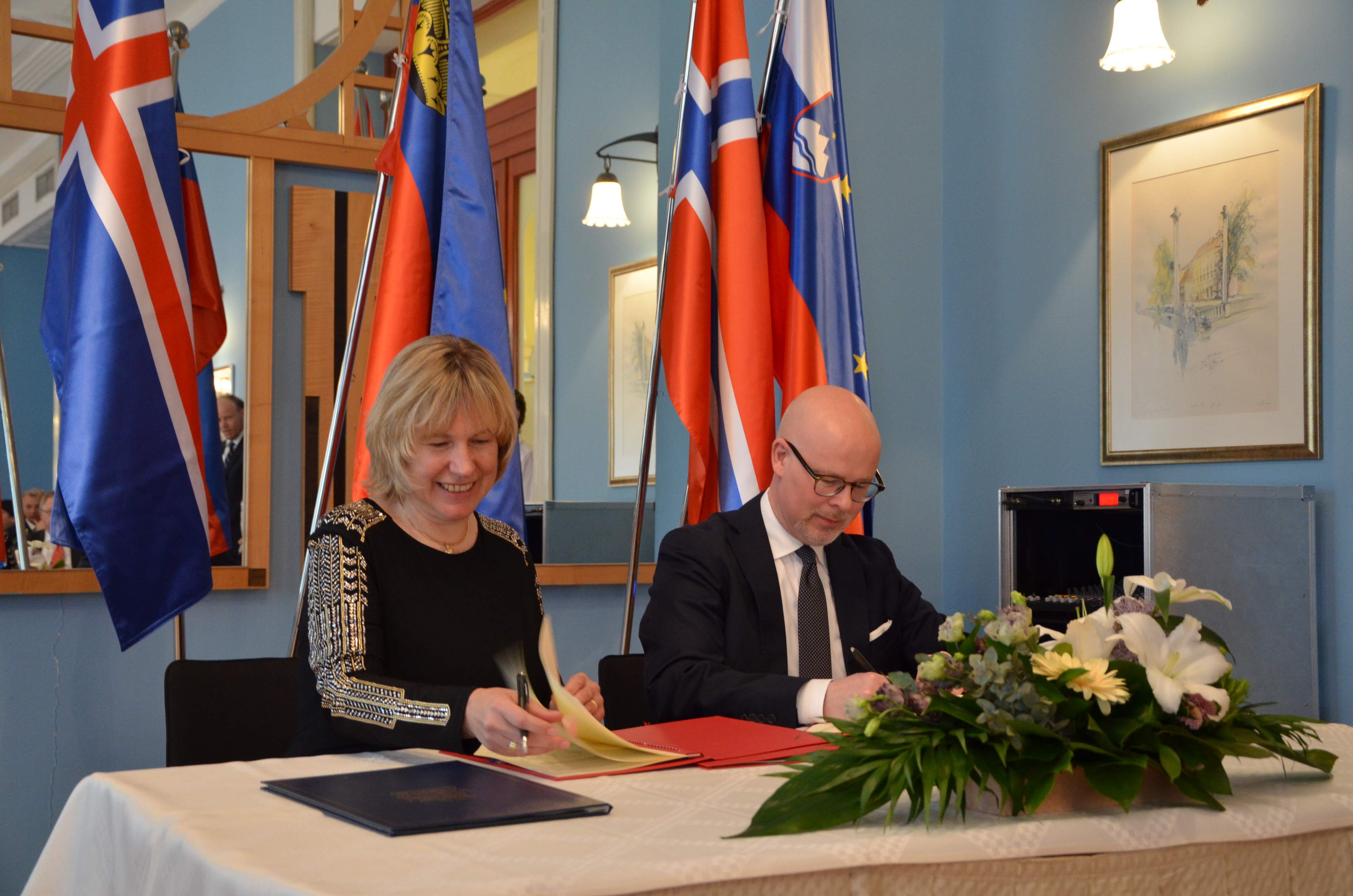 The EEA Grants and the Norway Grants contribute to reducing economic and social disparities within the European Economic Area, and promote and strengthen bilateral relations between the donor states and 15 EU countries in Central and Southern Europe and the Baltics. State Secretary at the Norwegian Ministry of Foreign Affairs Mr Audun Halvorsen highlighted that Slovenia and Norway enjoy excellent bilateral relations, and that strong partnerships were built in the past. While these partnerships will be a strong foundation for future partnerships, their work will also further be continued, added State Secretary. Minister Smerkolj reaffirmed the commitment to work together closely with the donor states in the period 2014−2021, and underlined that the Grants have been a unique funding instrument which has made a lasting impact on the life of people involved in Grants-funded projects.

For the period 2014−2021, the vision of the EEA and Norway Grants focuses on common European challenges under the slogan ‘’Working together for a green, competitive and inclusive Europe’’. Two common goals are being pursued: contributing towards reducing economic and social disparities in the European Economic Area, and strengthening bilateral relations between the donor countries and beneficiary countries.

A total of EUR 37.7 million is made available to Slovenia in the period 2014−2021, of which EUR 19.9 million comes from the EEA Grants and EUR 17.8 million from the Norway Grants. Two programmes were proposed following a programming process and a complex coordination process which gave voice to the relevant stakeholders in Slovenia, namely the programme called ‘’Human Capital Enhancement’’ (which addresses priority sector Innovation, Research, Education and Competitiveness), and the programme called ‘’Climate Change Mitigation and Adaptation’’ (which addresses priority sector Environment, Energy, Climate Change and Low Carbon Economy). Slovenia is also eligible to support from three funds established under the Grants, i.e. Fund for Bilateral Relations, Active Citizens Fund, and Global Fund for Decent Work and Tripartite Dialogue.

On the basis of the signed Memorandums of Understanding and the programmes identified in the two documents, the Government Office for Development and European Cohesion Policy will, on behalf of Slovenia, develop and submit to the donor states the concept notes for each programme, which will be followed by the signing of the relevant Programme Agreements. The signed Programme Agreements for the Human Capital Enhancement Programme and Climate Change Mitigation and Adaptation Programme will constitute the framework for launching calls for proposals and using the allocated funding.

Slovenia is launching the third consecutive funding period of the EEA and Norway Grants. The country implemented over 120 projects with support from the Grants in the past. The projects were implemented in a number of areas, including environmental protection, climate change, biodiversity and ecosystems, environmental monitoring and integrated planning and control, civil society, human and social development. This last area has witnessed a number of important changes and considerable progress, as the projects addressed pressing issues such as public health, gender equality and work-life balance, and dealt with natural and cultural heritage conservation, and promotion of research, scholarships, decent work and tripartite dialogue.

Donor delegation visits the Ljubljana Marshes and the Paediatric Clinic in ...